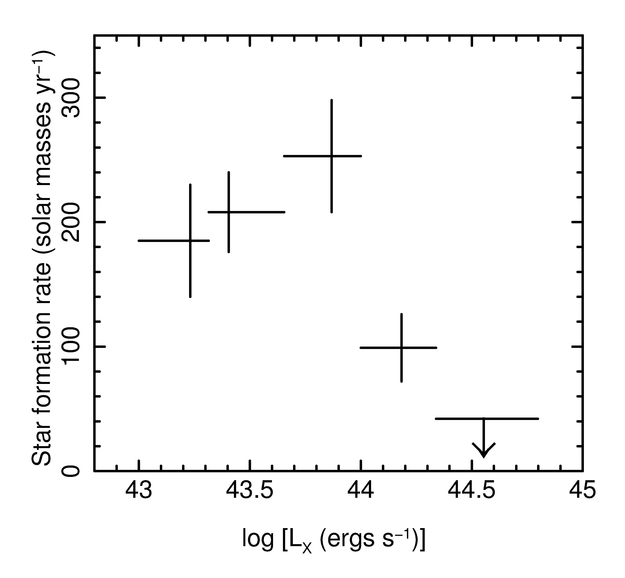 This graph shows how the average rate of star formation for a sample of galaxies varies as a function of their brightness in X-rays. The star formation rate of a galaxy (expressed in solar masses per year) is inferred from its brightness in the far-infrared and sub-millimetre portions of the electromagnetic spectrum; on the other hand, the X-ray brightness (LX) is an indicator of the activity of the supermassive black hole hosted at the galaxy's centre.

In this study, a team of astronomers have used observations of high-redshift galaxies performed with ESA's Herschel Space Observatory and NASA's Chandra X-ray Observatory. Focussing on the cosmic epoch when the Universe was two to six billion years old, they singled out the galaxies in their sample with redshifts between 3 and 1 and investigated how their star formation rate and their X-ray brightness are correlated.

As the graph shows, the data exhibit two distinct trends: below a certain threshold, corresponding to an X-ray luminosity of 1044 erg/s, the two quantities correlate and galaxies hosting more active black holes do form stars at a higher rate. However, this correlation does not hold for the galaxies that harbour the most powerful black holes: in these objects, star formation appears to proceed at very moderate rates. This suggests that only the most powerful among black holes are able to quench the star formation taking place in their host galaxies. This result has been published in a paper by Page et al., 2012.