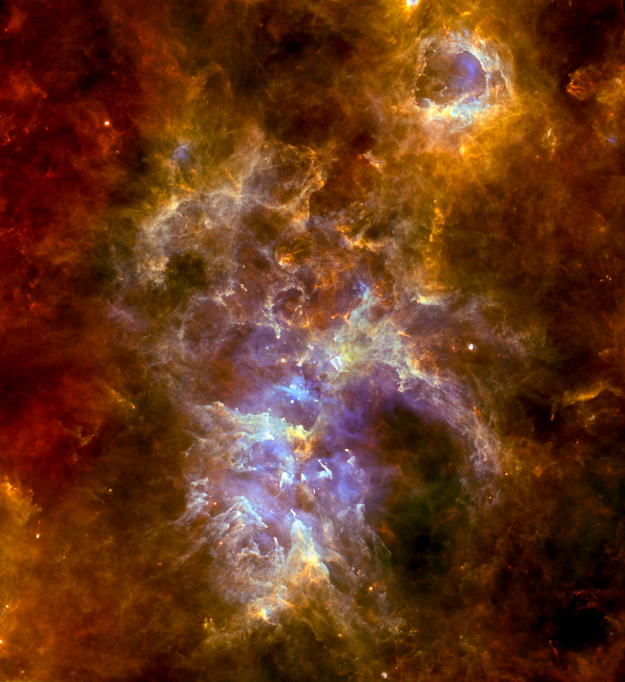 This image of the Carina Nebula complex, taken with ESA's Herschel Space Observatory at far-infrared wavelengths, shows the intricate network of clouds that make up this prolific cosmic nursery, where tens of thousands of new stars are being formed.

The complex exhibits a rich assortment of bubbles, filaments and pillars. Partly responsible for creating this tangled structure are the numerous high-mass stars hosted within this star-forming region – in the central region alone, the Carina Nebula boasts a census of more than a hundred very massive stars of type O, B and Wolf-Rayet. These mighty stars, which infuse their surroundings with powerful winds and large amounts of ionising radiation, not only contribute to shaping the nebula's appearance, but also have a significant impact on the star formation activity that takes place within it.

In the central portion of the image, where several stellar clusters host young, massive stars, feedback effects have cleared out the region, and the diffuse material there shines brightly at the shortest of the wavelengths probed by Herschel (hence the blue-white glow that characterises this portion of the image). The impact of high-mass stars is revealed also in the upper part of the image, where a series of large bubbles have been carved by winds blown by stars at their centre. The most prominent of these bubbles, named Gum 31, is visible at the top right corner of the image; it is the result of feedback from massive stars in the young cluster NGC 3324 hosted within the bubble.

At the lower left part of the image a large number of elongated structures, called the Southern Pillars, can be seen. At the base of these pillars, the mixture of gas and dust is extremely dense, highlighting that in this portion of the nebula the feedback from massive stars has caused the material to concentrate in several compact clumps. New generations of stars will eventually emerge from these dense blobs of matter. A pronounced dark region is adjacent to the right edge of the Southern Pillars: the origin of this bubble-like feature is unclear, as the stars hosted there are not massive enough to have sculpted it with winds. Astronomers believe that it might have been caused by gusts of hot gas leaking from the powerful stars at the centre of the nebula.

The delicate balance of star formation in the Carina Nebula