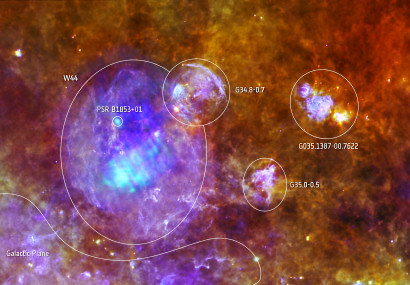 This image shows a composite view of supernova remnant W44 (SNR W44), a prime example of the interaction between the remains of a supernova and the dense interstellar material around it. The composite image is based on data from ESA's Herschel and XMM-Newton space observatories, which observed the source at far-infrared and X-ray wavelengths, respectively.

The Herschel view of SNR W44 shows its asymmetric expanding shell, which can be seen as the large violet bubble with filamentary texture occupying the left half of the image. The shell is about 100 light-years across and, just above the centre of the image, it is impacting the arc-shaped bright feature to the right – an HII region known as G34.8-0.7.

The XMM-Newton image illustrates how the shell is filled with hot gas that gives off large amounts of X-rays. These appear in the image as the dark blue and light blue clouds that fill the bubble, and correspond to lower-energy (1.2-2 keV) and higher-energy (2-8 keV) X-rays. Also visible in the XMM-Newton image is the pulsar PSR 1853+01, which most likely derives from the core of SNR W44's progenitor star. The pulsar can be seen as the bright point source towards the top left of the remnant.

With both a glowing, expanding shell and the hot, X-ray emitting gas that fills it, SNR W44 is classified as a mixed-morphology supernova remnant.