A new census of starburst galaxies across the Universe

A new census of starburst galaxies across the Universe 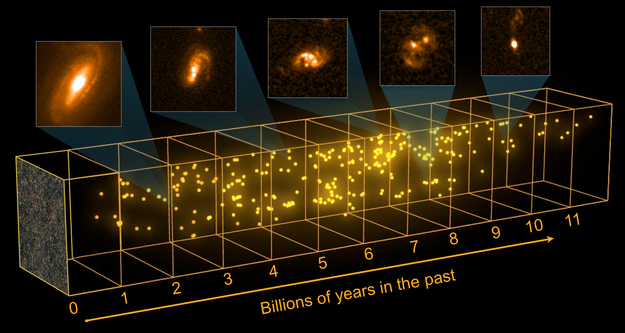 This illustration shows the distribution of nearly 300 galaxies from the COSMOS field across the history of the Universe.

The illustration is based on a photometric survey conducted with ESA's Herschel Space Observatory to identify a large number of starburst galaxies. Follow-up observations with the W. M. Keck Observatory were used to measure the redshifts of the galaxies.

The redshift, determined from the position of the spectral lines, provides astronomers with a measure of how long the light from each galaxy has travelled across the Universe. In turn, this indicates when, in cosmic history, the light from each galaxy was emitted. For most galaxies in this new census, their light was emitted during the past ten billion years; a fraction of them – about five per cent of the survey – lie even farther away from us, as their light was emitted when the Universe was only one to three billion years old.

On the left is an image of the COSMOS field – one of the fields used in the survey – as viewed with Herschel. The full census comprises 767 starburst galaxies with known redshifts and is based on observations of the following fields: Lockman Hole North, GOODS-North, ELAIS-N1, extended UKIDDS Ultra Deep Field, COSMOS, and extended Chandra Deep Field South.