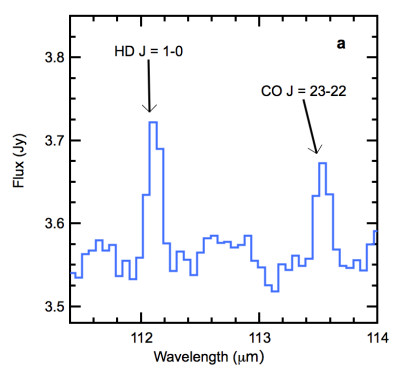 This graph shows a portion of the far infrared emission spectrum from the protoplanetary disc around the nearby young star TW Hydrae. It was recorded with the PACS instrument on board ESA's Herschel Space Observatory.

Protoplanetary discs form around young stars from leftover material from the stellar formation process, which consists mainly of molecular hydrogen gas. This material orbits the star in a protoplanetary disc for several millions of years before it condenses into planets or is dispersed away by winds driven by the radiation of the star. In addition, trace amounts of cosmic dust and other gas species are present in the disc.

The conditions in most of a protoplanetary disc are such that molecular hydrogen hardly emits. Astronomers have in the past used other species that are found in these discs to trace molecular hydrogen. Species such as carbon monoxide (CO), which is also a gaseous molecule, and dust grains, which are solid agglomerates of atoms and molecules, are present only in sparse quantities but radiate readily and so can be used to trace the more abundant but elusive molecular hydrogen. However, complex modelling and assumptions about the relative abundance of these proxies with respect to hydrogen are needed to convert the inferred mass of either CO or dust into an estimate of the disc's total mass, introducing a substantial degree of uncertainty. This has hindered astronomers from determining disc masses accurately.

Astronomers using Herschel have detected HD in the protoplanetary disc around TW Hydrae, and have used this molecule as a tracer of the disc's main constituent – molecular hydrogen. This study has yielded the first accurate determination of the mass of a protoplanetary disc. With a mass equivalent to 50 times that of Jupiter, the disc around TW Hydrae is several times more massive than the primordial disc that gave birth to our Solar System.