Artist's impression of galaxy with radio-bright jets and lobes

Artist's impression of galaxy with radio-bright jets and lobes 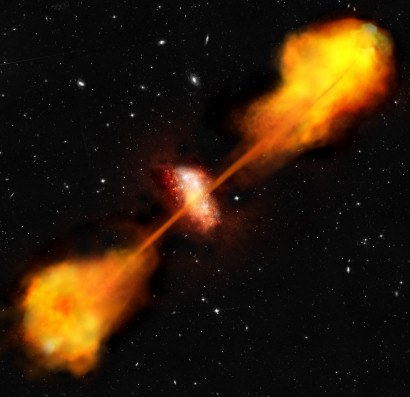 This illustration shows a radio-galaxy in the early Universe that is releasing material via two symmetric jets of highly energetic particles, at the end of which are two lobes that shine brightly at radio wavelengths as a result of synchrotron emission. The outflow is triggered by the supermassive black hole hosted at the centre of the galaxy.

The effects of supermassive black holes on their host galaxies pose a tricky puzzle: numerical simulations suggest that star formation in early galaxies might be suppressed by the activity of the supermassive black holes at their centres. In some galaxies, the central black hole accretes matter at extraordinarily high rates, giving rise to very bright emission across the electromagnetic spectrum; these galaxies are said to host an active galactic nucleus (AGN). The accretion process is accompanied by the outflow of material and, if it is powerful enough, this may eventually drain the galaxy's reservoir of gas, halting its star-forming activity.