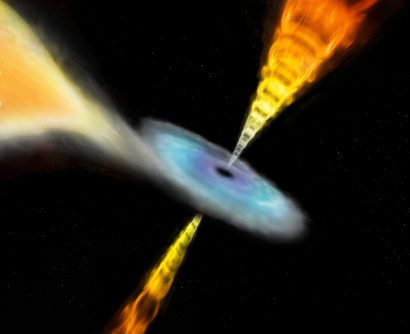 This artist's impression shows the GX 339-4 binary system, which consists of a 7-solar-mass black hole that accretes mass from its companion, a low-mass star, shown on the left. The process takes place via an accretion disc and also triggers the release of powerful jets of highly-energetic particles.

Observations performed using ESA's Herschel space observatory have provided the first view of GX 339-4 at far-infrared wavelengths, allowing astronomers to probe the jets down to their base, where the far-infrared emission originates. This is an important addition to the understanding of black-hole jets and of the physical processes that take place very close to a black hole.

Herschel gets to the bottom of black-hole jets