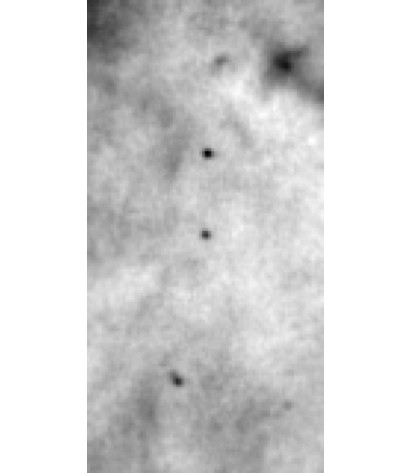 This image shows the black-hole binary system GX 339-4 as seen with ESA's Herschel space observatory in the far-infrared portion of the electromagnetic spectrum, at a wavelength of 70 microns. The binary system, which can be seen as the dark spot at the centre of the image, consists of a 7-solar-mass black hole that accretes mass from its companion, a low-mass star.

The accretion of matter onto the black hole takes place via an accretion disc and also triggers the release of powerful jets of highly-energetic particles. Different regions in the jets emit radiation at different wavelengths: the base of the jets, closer to the black hole, emit light at shorter wavelengths (infrared) than the extremity of the jets, which shine brightly in radio waves. The Herschel observations have provided the first view of GX 339-4 at far-infrared wavelengths, allowing astronomers to probe the jets down to their base, where the far-infrared emission originates.

The astronomers requested observations of GX 339-4 with Herschel after they detected changes to its X-ray emission, signalling that the outburst phase of this source, which had been going on for several months, was about to cease. When black-hole binaries undergo outbursts, their jets shine very brightly at radio wavelengths, consist of multiple ejections, and extend up to 10 000 Astronomical Units (AU). When the outburst phase is over, the jets show weaker radio emission and extend only up to about 10 AU: these are known as 'compact jets'. This is the first time that astronomers could witness the onset of compact jets and follow their evolution.

Herschel gets to the bottom of black-hole jets