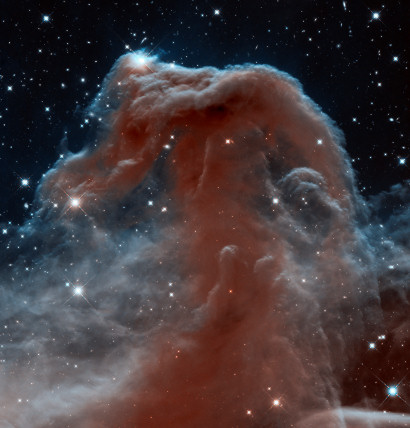 This image shows the Horsehead Nebula as viewed at near-infrared wavelengths with the Wide Field Camera 3 on board the NASA/ESA Hubble Space Telescope. This thick pillar of gas and dust is sculpted by powerful stellar winds blowing from clusters of massive stars located beyond the field of this image.

At visible wavelengths, this 'dark nebula' appears as a silhouette against the diffuse glow of the surrounding IC 434 nebula, as it consists of material so dense that it blocks visible light from background stars or surrounding clouds.

The structure of the dense material in the Horsehead Nebula can be revealed via near-infrared images. At these wavelengths, light is no longer absorbed by the nebula material, so the distribution of gas that will develop into stars is exposed, along with the gleam from stars located either within the nebula or in the background. The bright source at the top left edge of the nebula is a young star that has taken shape from the cloud and whose radiation is already eroding the surrounding interstellar material.

A Horsehead, a Flame and hidden gems in Orion B