Artist's impression of the Galactic Centre

Artist's impression of the Galactic Centre 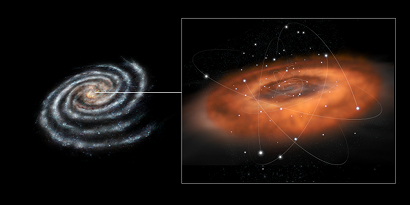 This illustration shows an artist's impression of the environment at the centre of our Galaxy, the Milky Way. The Galactic Centre hosts a supermassive black hole in the region known as Sagittarius A*, or Sgr A*. With the mass of about 4 million times that of our Sun, this black hole currently accretes matter from its surroundings at very moderate rates compared to the vigorous processes that characterise black-hole accretion in galaxies hosting an Active Galactic Nucleus (AGN).

A dense torus of molecular gas and dust, the circumnuclear disc, surrounds the Galactic Centre and occupies the innermost 15 light-years of the Galaxy. Enshrouded within the disc is a central cavity, with a radius of a few light-years, filled with warm dust and lower density gas. Part of this gas is being ionised by the strong ultraviolet radiation from massive stars that closely orbit the central black hole.