Herschel spectrum of the Galactic Centre

Herschel spectrum of the Galactic Centre 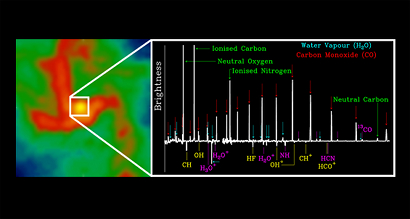 This image combines a view, obtained at radio wavelengths, of ionised gas at the centre of our Galaxy, the Milky Way (left panel), with a spectroscopic view of the very central region, taken with ESA's Herschel Space Observatory at far-infrared wavelengths (right panel). In this continuum-subtracted spectrum, the characteristic signatures of many chemical species can be seen.

The spectrum shows the rich variety of molecules that have been detected in this region, which range from carbon monoxide and water vapour to hydrogen cyanide and many light molecules that play a critical role in the chemistry of the interstellar medium. Some of them had not been detected before Herschel.

These data show that the molecular gas is surprisingly hot – the temperature estimated from the emission from carbon monoxide reaches up to 1000 K. The most likely cause of the rise in temperature of the hot molecular gas are shocks that develop as gas orbits around or flows towards Sagittarius A* (Sgr A*), the region hosting the supermassive black hole that lies at the centre of the Milky Way.

The radio image shows the so-called central cavity, a region with a radius of a few light-years that is filled with warm dust and gas. Part of this gas is being ionised by the strong ultraviolet radiation from massive stars that closely orbit the central black hole. As the black hole slowly accretes matter, individual clouds of gas flowing towards it from the central cavity can sometimes be detected, and the black hole accretion process can be followed from radio wavelengths to X- and gamma-rays.