Merging galaxies in the young Universe discovered with Herschel

Merging galaxies in the young Universe discovered with Herschel 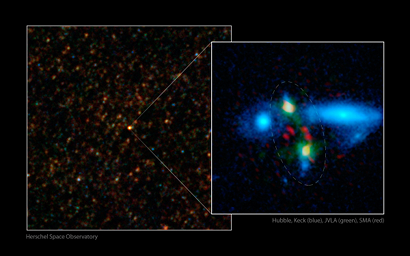 This image shows the source HXMM01, which was discovered in a survey from ESA's Herschel Space Observatory and comprises a pair of massive and gas-rich galaxies in the process of merging.

The left panel shows the field observed with the SPIRE instrument on board Herschel: HXMM01 stands out as an exceptionally bright source. The right panel shows a composite of images taken at higher angular resolution across the electromagnetic spectrum: near-infrared data from the NASA/ESA Hubble Space Telescope and from the W. M. Keck Observatory are shown in blue, and represent emission from the stellar component; sub-millimetre data from the Smithsonian Astrophysical Observatory's Submillimeter Array (SMA) are shown in red and represent the emission from dust; radio data from NRAO's Karl G. Jansky Very Large Array (JVLA) are shown in green and represent emission from molecular gas. The portions of the image that appear white are those where all three emissions were detected.

The higher resolution view revealed that HXMM01 consists of two separate sources, as highlighted by the oval in the image. They are two physically distinct galaxies lying at redshift 2.310 (upper left) and 2.307 (lower right) and currently in the process of merging. The galaxies date back to the epoch when the Universe was barely three billion years old.

A bridge of gas connecting the two merging galaxies is visible in the radio data. The two large blobs on the right and left of the merging system, respectively, are foreground galaxies located at redshifts of 0.502 (right) and 0.655 (left). These galaxies exert only a weak gravitational lensing effect on the merging system in the background.

The two merging galaxies are about 65,000 light years apart, which is a typical separation for pairs of interacting galaxies. Each of the two galaxies has a stellar mass of about 100 billion solar masses, and they each contain roughly the same amount of gas. The astronomers estimated that the merging process would take at most 200 million years to complete, resulting in a massive elliptical galaxy of about 400 billion solar masses.