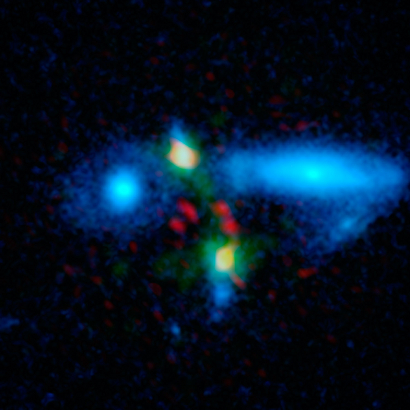 This image shows the source HXMM01, which was discovered in a survey from ESA's Herschel Space Observatory and comprises a pair of massive and gas-rich galaxies in the process of merging.

This multi-wavelength view revealed that HXMM01 consists of two physically distinct galaxies lying at redshift 2.310 (upper left) and 2.307 (lower right) and currently in the process of merging. The galaxies date back to the epoch when the Universe was barely three billion years old.

A bridge of gas connecting the two merging galaxies is visible in the radio data. The two large blobs on the right and left of the merging system, respectively, are foreground galaxies located at redshifts of 0.502 (right) and 0.655 (left). These galaxies exert only a weak gravitational lensing effect on the merging system in the background.

The two merging galaxies are about 65,000 light years apart, which is a typical separation for pairs of interacting galaxies. Each of the two galaxies has a stellar mass of about 100 billion solar masses, and they each contain roughly the same amount of gas. The astronomers estimated that the merging process would take at most 200 million years to complete, resulting in a massive elliptical galaxy of about 400 billion solar masses.

The angular size of the image is about 8 arc seconds on each side.