Tracers of molecular gas across the plane of the Milky Way

Tracers of molecular gas across the plane of the Milky Way 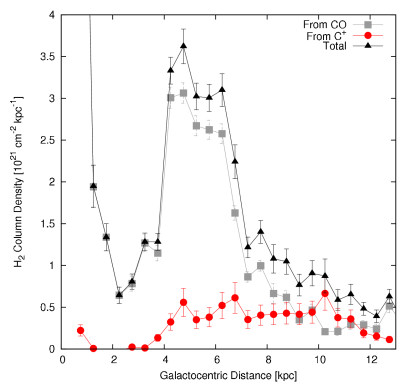 This graph shows the distribution of molecular gas across the plane of the Milky Way as a function of distance from the Galactic Centre. The graph shows the density of molecular gas as probed via two different indirect tracers: carbon monoxide (CO), shown in gray, and ionised carbon (C+), shown in red. The cumulative distribution, taking into account both components, is shown in black.

Molecular gas is the raw material from which stars form. It consists mainly of molecular hydrogen (H2), a gas that does not emit any light at the low temperatures found in molecular clouds. The most widely used proxy to track down molecular gas in star-forming regions is CO. A mere contaminant in molecular clouds, CO radiates much more efficiently than H2 and can be detected easily.

However, such indirect tracers can be biased, since there is no guarantee that all portions of a cloud containing H2 also contain CO, in which case observations of CO would miss these regions entirely. To achieve a more complete picture of the Milky Way's molecular content, astronomers have combined observations of CO with other tracers of H2. These studies suggest the presence of more molecular gas in the Milky Way than indicated by CO alone.

New data from ESA's Herschel Space Observatory are now confirming that almost one third of all molecular gas in the Milky Way had remained undetected. The new survey, which probed H2 through the emission from C+, not only uncovered this hidden pool of material for potential future stars, but also revealed that it is distributed in a curious way.

The CO-dark H2 detected with Herschel is mostly located in a ring surrounding the centre of the Galaxy at radii between 13 000 and 36 000 light-years. This extends much farther than CO-traced molecular gas, which is most concentrated in the innermost regions of the Galaxy, peaking at a radius of about 13 000 light-years, and declining in density at greater distances.