Herschel image and spectrum of the Crab Nebula

Herschel image and spectrum of the Crab Nebula 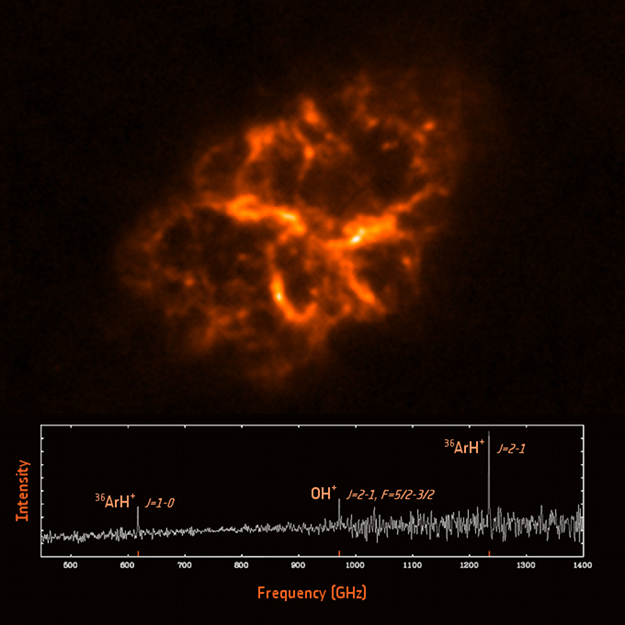 This image shows the Crab Nebula, an iconic supernova remnant in our Galaxy, as viewed by ESA's Herschel Space Observatory. A wispy and filamentary cloud of gas and dust, the Crab Nebula is the remnant of a supernova explosion that was observed by Chinese astronomers in the year 1054.

This image is based on data taken with the PACS instrument on board Herschel, at a wavelength of 70 microns. At these long wavelengths, astronomers can detect the glow from cosmic dust present in the nebula.

The spectrum, which was originally taken to study the dust content of this supernova remnant, enabled the serendipitous discovery of the first noble-gas based compound found in space: argon hydride (ArH+).

On top of the emission from dust, which dominates the continuum emission seen in the spectrum, the team of astronomers found two emission lines that had never been seen before. These are the two lines seen at the left-hand and right-hand side of the spectrum.

The astronomers identified these lines as the first two rotational transitions of ArH+ at frequencies of 617.5 GHz and 1234.6 GHz, respectively. The investigation was performed with the help of two extensive databases of molecular spectra, and through comparison with another, well studied emission line that was found in the Crab Nebula's spectrum – that from the molecular ion OH+, visible near the  centre of the spectrum, at a frequency of 971.8 GHz.