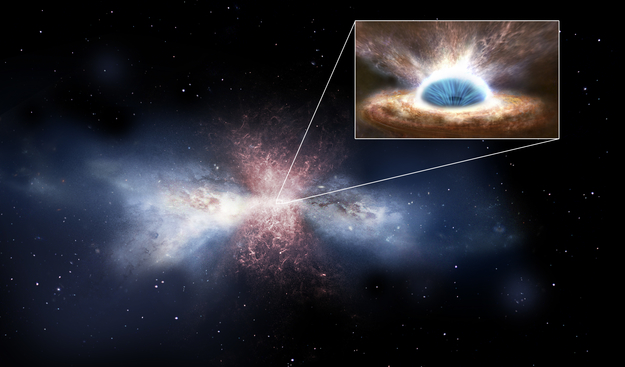 This image shows an artistic representation of an active supermassive black hole at the centre of a galaxy, which is driving powerful winds that are triggering the outflow of large amounts of molecular gas in the interstellar material of its host galaxy. Such outflows can eventually sweep away most of the galaxy's reservoir of 'star-making' gas, possibly bringing an end to star formation on a galactic scale.

The first direct evidence supporting this feedback scenario was made possible by combining far-infrared observations from ESA's Herschel space observatory, which detected large-scale outflows of molecular gas in the galaxy IRAS F11119+3257, with X-ray data from the Japanese/US Suzaku X-ray observatory, which could sense the winds close to the black hole. The multi-wavelength aspect of this study was crucial to linking what happens in the vicinity of the black hole and its global effect on the galaxy as a whole.

The galaxy observed in this study is an Ultra-Luminous InfraRed Galaxy (ULIRG) at redshift 0.189, whose light has taken some two billion years to reach us. Astronomers consider these 'local' ULIRGs to be systems that are undergoing massive galactic mergers; in turn, the merger spurs intense bursts of star formation.

While many of the supermassive black holes sitting at the centre of galaxies are dormant, the one hosted in IRAS F11119+3257 is actively devouring the surrounding material at a very high pace. Active black holes like this one not only feed on the surrounding gas, but also cast part of it away through powerful winds and jets. This is represented in the inset shown in the top right corner of the image, which provides a zoomed-in view on the phenomena that are happening in the very central region of the galaxy.

As demonstrated in the case of IRAS F11119+3257, black-hole driven winds (represented in blue in the inset) are able to power massive outflows in the host galaxy (shown here in red). These outflows can disperse the galaxy's reservoir of raw material to form stars and eventually put an end to its star-forming activity.