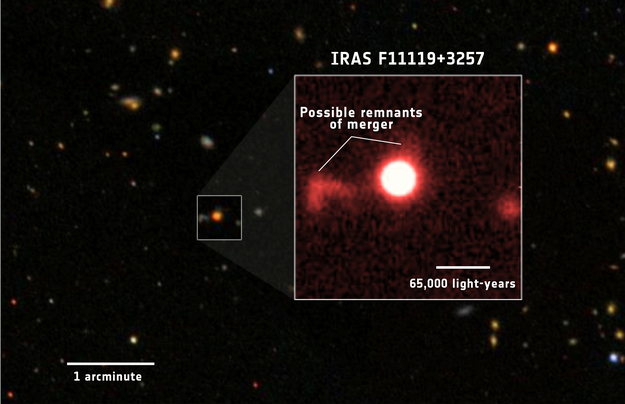 Image of the galaxy IRAS F11119+3257, an Ultra-Luminous InfraRed Galaxy (ULIRG) hosting an active black hole at its centre. ULIRGs are systems undergoing a galactic merger between two gas-rich progenitors, on the way to becoming an elliptical galaxy.

The background is an image from the Sloan Digital Sky Survey, while the inset is a red-filter image from the University of Hawaii's 2.2 m-diameter telescope. The inset shows faint features that may be tidal debris, a sign that this object is undergoing a galactic merger.

Astronomers studying the supermassive black hole at the centre of this galaxy have found proof that the winds blowing from the black hole are sweeping away the host galaxy's reservoir of raw star-building material.

This finding was made using ESA's Herschel space observatory, together with the Japanese/US Suzaku X-ray astronomy satellite. Combining these data, the astronomers detected the winds being driven by the central black hole in X-rays, and their global effect, pushing the galactic gas away, at infrared wavelengths.