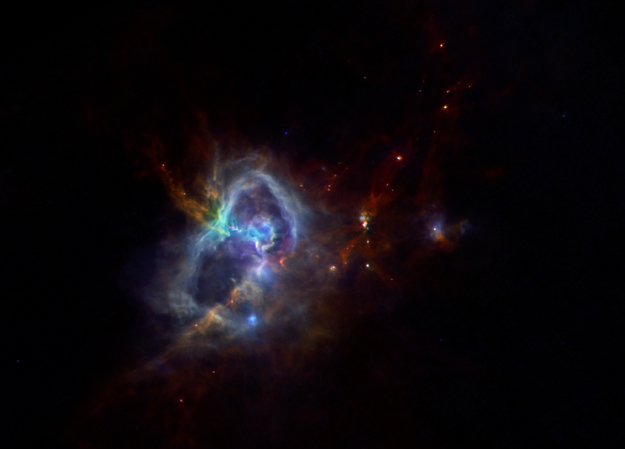 Six hundred newly forming stars are crowded into intricate filaments of gas and dust that makes up this stellar nursery, seen for the first time by ESA's Herschel space observatory.

The nebulous area coloured in blue, known as W40 or Sharpless 2-64, is roughly 1000 light-years away in the constellation Aquila, and is about 25 light-years across.

It is a vast cloud of hydrogen gas, illuminated by the radiation streaming out from at least three young massive stars embedded in the cloud.

The nebula is expanding into the surrounding medium, compressing the ambient gas on its way and triggering the formation of a second generation of even younger stars.

In total, around 600 condensations of dust and gas have been estimated in this field of view, the majority of which will eventually collapse to form stars.

Already about 150 objects are in the final stages of forming stars. Once nuclear fusion kicks in, their cores will ignite and they will become fully fledged stars.

W40 is part of a giant ring of stars and star-forming clouds known as Gould's Belt that appears to circle the night sky. These stellar nurseries are key targets for Herschel, allowing astronomers to compare the differences in star formation from region to region and to identify the role of the local environment in the process.

This image is from our archives; it was created from observations by Herschel's PACS and SPIRE instruments on 24 October 2009 and published on OSHI in 2011.