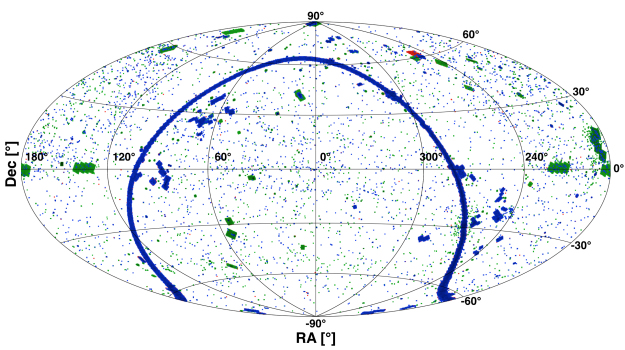 The Herschel PACS point source catalogue, released in May 2017, contains about 500 000 entries, distributed across the three PACS bands.

During the science operations phase, between May 2009 and April 2013, PACS mapped about eight per cent of the sky in far-infrared broad-band filters centred at 70, 100 and 160 microns with spatial resolutions of 5.6", 6.8" and 11.3", respectively. The 70-micron sources are plotted in blue, the 100-micron sources in green, and the 160-micron sources in red. The data points are plotted in the order red, green, blue, and since all the green and blue areas were also observed in the red band this results in only a few red regions being visible.

The PACS point source catalogue was extracted from a total of 14 842 Herschel PACS maps, consisting of 430 different observing proposals, all performed in standard observing modes, but with a wide variety of science goals.

The distinctive band reflects the dense observation coverage along the Galactic Plane.

The PACS point source catalogue, containing about 500 000 sources, is available from the Herschel Science Archive through ESASky and Virtual Observatory (VO) tools, such as TopCat, and from the NASA/IPAC Infrared Science Archive.

About the PACS Point Source Catalogue