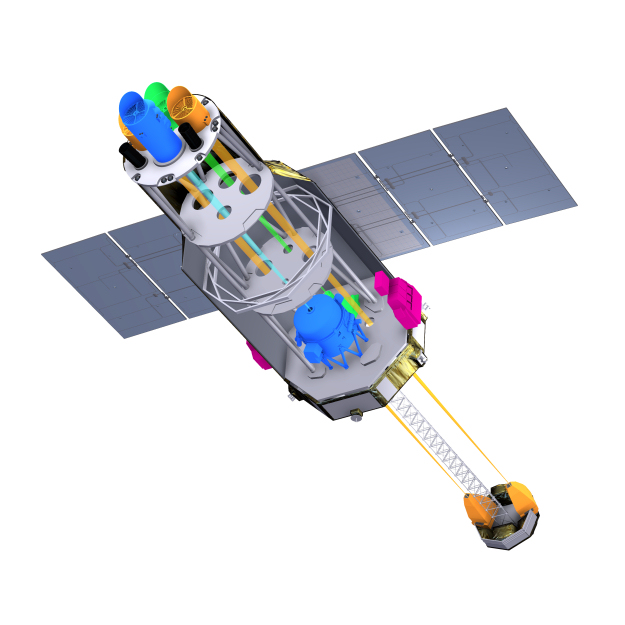 In this schematic view of Hitomi (known as ASTRO-H prior to launch), the four instruments on the satellite are highlighted.

The Soft X-ray Spectrometer (SXS) is indicated in blue. This high-resolution spectrometer is sensitive to soft X-rays in the range 0.3-12 keV. Photons are focussed by one of the two soft X-ray telescopes (top platform, shown in blue) onto an X-ray Calorimeter Spectrometer (XCS), which is stored inside a cooling system (centre) that keeps the temperature as low as 50 mK.

The Soft X-ray Imager (SXI) is indicated in green. SXI consists of the other soft X-ray telescope (top platform, shown in green) which focusses X-rays (0.5-12 keV) onto an X-ray CCD camera (centre).

The two units of the Soft Gamma-ray Detector (SGD), a non-focussing Compton camera to detect soft gamma-rays, are indicated in magenta.

The four instruments are co-aligned so they are able to observe the same region of the sky at the same time.

Hitomi is a high-energy astrophysics space observatory, developed by the Japan Aerospace Exploration Agency (JAXA) in collaboration with institutions in Japan, the US, Canada, and Europe.