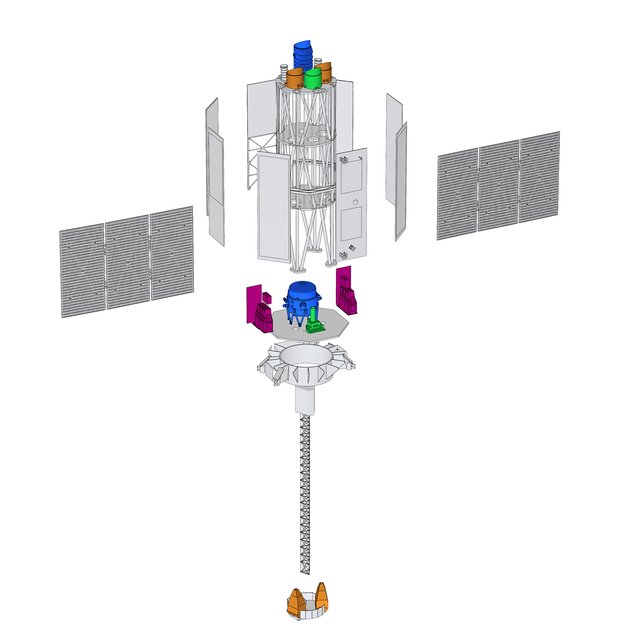 This exploded view of Hitomi shows various components of the satellites, including the four instruments which are highlighted in different colours.

At the opposite end of this cylinder is the focal plane of the two Soft X-ray Telescopes, where two instruments are located: the Soft X-ray Spectrometer (SXS), highlighted in blue, and the Soft X-ray Imager (SXI), in green.

The Soft X-ray Spectrometer (SXS) is a high-resolution spectrometer sensitive to soft X-ray light: the photons are focussed by one of the two soft X-ray telescopes (SXT-2, top left) onto an X-ray Calorimeter Spectrometer (XCS), which is stored inside a cooling system (centre, in blue) that keeps the temperature as low as 50 mK. The Soft X-ray Imager (SXI) receives light from the other soft X-ray telescope (SXT-1, top left), which focusses it onto an X-ray CCD camera (centre, in green).

The two units of the Soft Gamma-ray Detector (SGD), highlighted in magenta, are located outside of the main cylindrical structure.

The focal plane of the Hard X-ray Telescopes is below this plane, at the end of a 6-m long extendable boom that will be deployed once in orbit. There, highlighted in orange, are the detectors of the Hard X-ray Imager (HXI).