Asteroids group together in families, with almost empty gaps in between
Within this article:

Asteroids in the main belt are not evenly distributed. The gravitational influence of the planets, particularly Jupiter, causes them to collect in groups or 'families'. One of the largest of these is the Flora family, which has about 400 known members.

Other parts of the main belt, called Kirkwood gaps, are almost empty because regular gravitational interactions with Jupiter sweep the regions clear of asteroids. One gap occurs at 2.5 astronomical units (AU), that is, 375 million kilometres from the Sun, where an asteroid would complete three orbits for every one orbit by Jupiter. This is known as a 3:1 resonance.

Some asteroids have been trapped by the gravity of planets in such a way that they follow unusual orbits. More than 200 asteroids share the orbit of Jupiter. These so-called Trojan asteroids are trapped in two groups; one that follows 60° behind the planet and the other travels 60° in front. At least one small object, 3753 Cruithne, travels in a strange, that is, irregular, orbit around the Earth.

When astronomers began using photographic film during the late 1800s, searching for asteroids became easier. They would appear on long-exposure photographs as streaks, because of their motion, whereas stars showed up as points of light. Astronomers soon realised that asteroids were not all confined to the asteroid belt.

When asteroids collide, some of them may be knocked out of the main belt. Others may be disturbed by Jupiter's gravity and thrown out of the belt.

Meteor Crater (also called the Barringer Crater) in Arizona is the best-preserved and most famous impact crater on the Earth. It is about 1200 metres across, 183 metres deep and is surrounded by a wall of debris 30-45 metres high. It is thought to have resulted from an impact from an iron-rich meteorite about 50 000 years ago.

Stray asteroids can cross the orbits of Mars and the Earth, some may even strike a planet. More than 150 large impact craters have been identified on the Earth and more must lie hidden on the ocean floor. Many scientists believe that one 10-kilometre-wide object caused the extinction of the dinosaurs when it struck the Gulf of Mexico, 65 million years ago.

In the last century, an impact occurred on 30 June 1908, when a small, 100-metre-wide asteroid exploded over Tunguska in Siberia, Russia devastating about 200 000 hectares.

Near misses take place all of the time. One close call occurred on 23 March 1989, when a 400-metre-wide asteroid came within 640 000 kilometres of Earth. Scientists estimated that Earth and the asteroid, which weighed 50 million tonnes and was travelling at 74 000 kilometres per hour, had passed the same point in space just six hours apart. Scientists think that there are between 500 and 2000 near-Earth asteroids larger than 1 kilometre in diameter.

In March 1932, Eugene Delporte, in Belgium, discovered the asteroid Amor, which spends over half its orbit outside the main belt and actually crosses Mars's orbit. It comes close to Earth's orbit before heading outwards again. The next month, Karl Reinmuth, in Heidelberg, discovered Apollo. This asteroid spends most of its time inside Mars's orbit and also crosses Earth's orbit.

Scientists have discovered other examples of asteroids that follow similar orbits and have classified them as Amor and Apollo families. They think that Jupiter's gravitational field pushed the asteroids into these orbits.

In 1971, Eleanor Helin discovered the Atens. These asteroids spend most of their time inside the Earth's orbit and are therefore hidden by the glare of the daytime sky, except when they cross Earth's orbit for a brief period, before returning close to the Sun.

There may be other families of small asteroids within our Solar System waiting to be discovered. 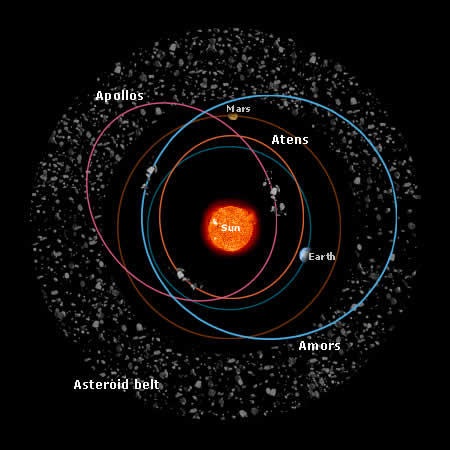