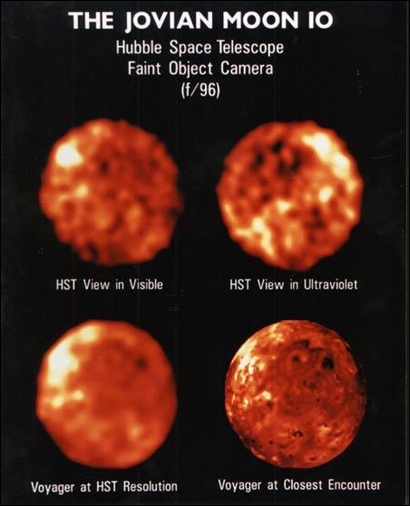 [Upper Left]
A visible-light image of the geologically active trailing hemisphere of the Jovian moon Io, taken on 15 March 1992, when Io was 414 million miles from Earth. HST resolves features as small as 150 miles across.

[Bottom Right]
An image of Io taken 13 years ago by the Voyager spacecraft at a distance of approximately 250 000 miles.

[Bottom Left]
A "synthetic" Voyager Image modified to match HST's resolution, due to the fact that HST is one thousand times farther from Io then Voyager was at closest approach. A direct comparison of the visual FOC visible light image with this synthetic Voyager image shows no change in the large scale distribution of surface materials in the 13 years which have elapsed between the two observations.