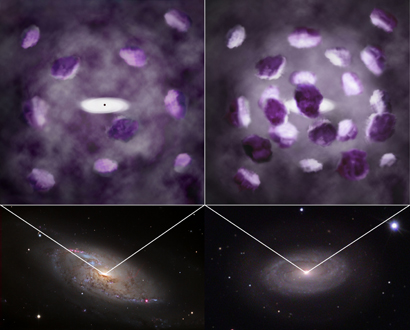 This image illustrates two different configurations of the absorbing material surrounding Active Galactic Nuclei (AGN) of different types. This scenario has been proposed by Ricci et al. (2011) based on INTEGRAL data.

In the left of the two upper panels, the black hole and the accretion disc feeding it are surrounded by a patchy and sparse distribution of gas clouds. The clouds absorb only slightly the radiation emitted by the central source and give rise to little reflection (or none) at hard X-ray wavelengths.

In the right of the two upper panels, instead, the black hole and accretion disc are embedded in a much denser environment of clouds. This different morphology results in both stronger reflection at hard X-ray wavelengths and stronger absorption at shorter wavelengths.

Such a scenario could explain the excess of hard X-ray emission detected in a sample of AGN observed with INTEGRAL. The excess emission characterises the AGN affected by stronger absorption at shorter wavelengths (i.e. from the infrared to the soft X-ray bands).