ISO Sees the Pattern in the Cosmic Wallpaper

ISO Sees the Pattern in the Cosmic Wallpaper 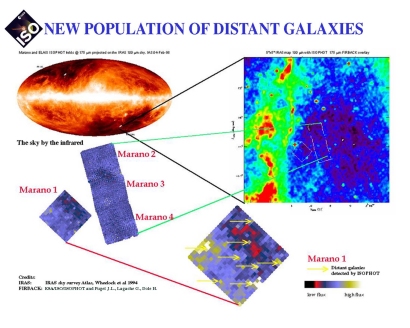 Two dozen distant galaxies that are undergoing a process of intense evolution - either merging to build larger ones or reaching their final shape - have been detected by a team of French astronomers using the European Space Agency's ISO space telescope. These are the first individual objects known to contribute their energy to the Cosmic Infrared Background, a radiation that fills the entire Universe like a kind of wallpaper. The new-found galaxies indeed resemble the 'pattern' in this cosmic wallpaper.

The oval-shaped image at the top-left corner is a map of the infrared sky obtained by the IRAS satellite. It shows in red the emission from objects in our own galaxy; this acts like a curtain making it difficult for astronomers to see through. For this observation the ISO telescope was pointed at a region of the southern hemisphere called the Marano Fields, which is especially clean of emission from foreground sources and is thus like a hole in the curtain.

The new population of galaxies now identified emit so faintly that astronomers could only detect them by using the spectrophotometer ISOPHOT on-board ESA'S ISO, the best and most sensitive infrared space telescope so far.

However, main author Jean-Loup Puget, at the Institut d'Astrophysique Spatiale in Paris, considers these galaxies to be "the tip of the iceberg" and expects to find many more such sources when searching with even more sensitive instruments such as the FIRST telescope already planned by ESA as ISO's successor.

INFO 24-1998: ISO sees the pattern in the cosmic wallpaper