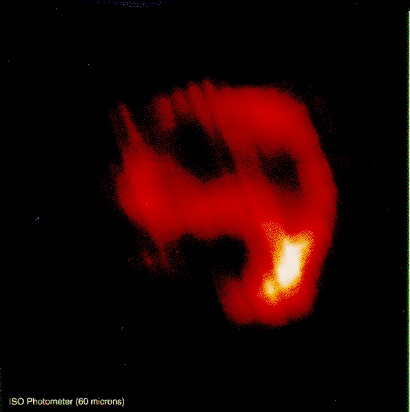 Seeing the Invisible: A Supernova Remnant

An image of debris from a star that exploded about a thousand years ago shows that the European Space Agency's new Infrared Space Observatory, ISO, can see features in the Universe invisible to ordinary telescopes. ISO's Imaging Photometer (also called ISOPHOT) has pictured it at an infrared wavelength of 60 microns. The Earth's atmosphere makes cosmic observations very difficult at such a wavelength - hence the need for Europe's space telescope dedicated to infrared astronomy.

The object MSH 11-54 lies in the Southern Cross constellation, about 10,000 light-years away. It is a supernova remnant. When a star explodes it shines very brightly as a supernova. After it fades, matter hurled from the explosion continues to spread outwards. Bright spots in this infrared image are regions where the scattered material interacts with pre-existing clouds in interstellar space.

MSH 11-54 is now very large, about 7 light-years wide, and although far away it appears to be about a quarter of the width of the Full Moon. Visible light reveals nothing unusual in its region of the sky. The supernova remnant has, though, been observed by X-ray telescopes in space.

Astronomers will use ISO to examine this and other supernova remnants in great detail. The formation of dust from new chemical elements released by exploding stars marks the start of the process by which solid bodies like the Earth are created. The Photometer team will look also for the signature of microscopic diamonds which stellar explosions may scatter across the sky.