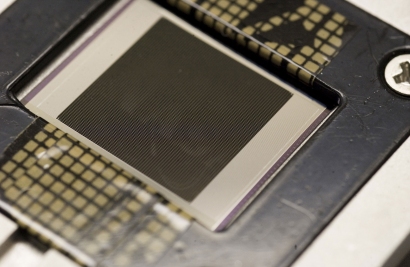 The Micro-Shutter Array (MSA), provided by NASA, is key to NIRSpec's ability to perform simultaneous, multi-object spectroscopy of 100’s of celestial targets.

The array is composed of four independent quadrants, each one housing a Micro Electro-Mechanical Systems (MEMS) array, made up of 365 x 171 shutters, whose dimensions are only 80 µm x 180 µm. There are more than 1000 electrical connections obtained with bump bonding and hair-thin wire bonding techniques between each array and its quadrant. Each quadrant also houses four electronic chip controls and monitors the functionality of the shutters.

Each of the quarter of a million shutters can be addressed independently to obtain any pattern of opened/closed 'slits'. A narrow, strong quadrupole magnet, mounted on a linear moving arm, sweeps up/down across the magnetically sensitive shutters pushing them open. Electrical signals, synchronised with the sweep, are applied to the shutters and to their side walls causing them to electrostatically latch open against the walls. On the return sweep of the magnet, the desired pattern of open shutters is achieved by allowing walls that are not required for the slit pattern to discharge and to gently close the shutters by the dampening magnetic force.