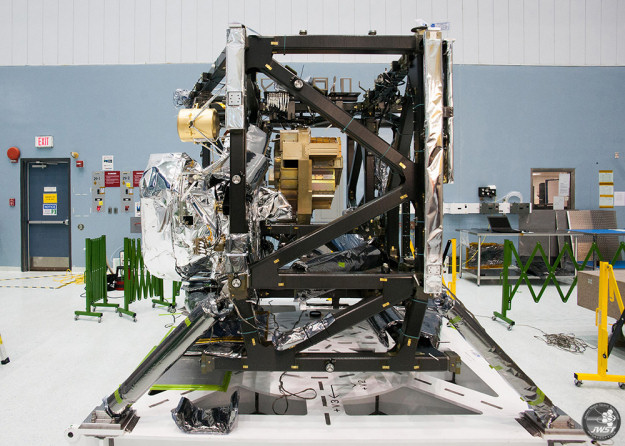 The Mid-Infrared Instrument (MIRI) and the Fine Guidance Sensor / Near InfraRed Imager and Slitless Spectograph (FGS/NIRISS) have been integrated into the JWST Integrated Science Instrument Module (ISIM).

In this photograph, MIRI is the silver coloured item on the left of ISIM - the black structure. In the centre of the ISIM the bronze coloured FGS/NIRISS instrument can also be seen.

MIRI will detect emission in the mid-infrared range, and thermal emission from the ISIM structure could interfere with these measurements. MIRI is wrapped in an aluminized thermal shield that will help deflect any stray thermal light and keep MIRI cold. MIRI is actively cooled to 7 Kelvin (-266 ). To get it this cold, the gold coloured cylinder - the  cold head assembly - is used.

The other three instruments (NIRCAM, NIRSpec and FGS/NIRISS) and the ISIM will be cooled to 40K.