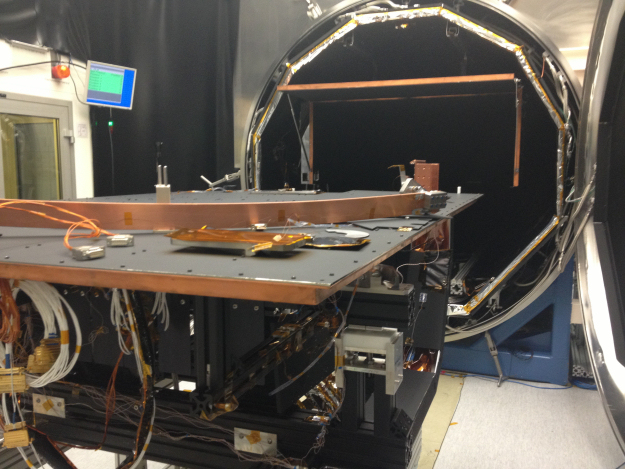 This view shows the cryogenic test chamber with the door open. The circular door can be seen on the extreme right side of the picture.

The decagonal structure, inside the circular metallic door frame, is the nitrogen shroud. This is the enclosing envelope that will be cooled down to the temperature of liquid nitrogen -196 degrees Celsius (77 K).

The rectangular copper-coloured box - with a missing base - is the helium shroud. NIRSpec will be installed in this box, cooled and kept to its operating temperature of 40 K.

The table in the foreground is the support structure on which NIRSpec will be installed. The copper-coloured base of the Helium shroud can be seen here. This table is installed on rails and can be rolled in and out of the chamber.

The area where the picture has been taken is enclosed in a "clean tent" to create a small cleanroom where the instrument can safely be prepared.