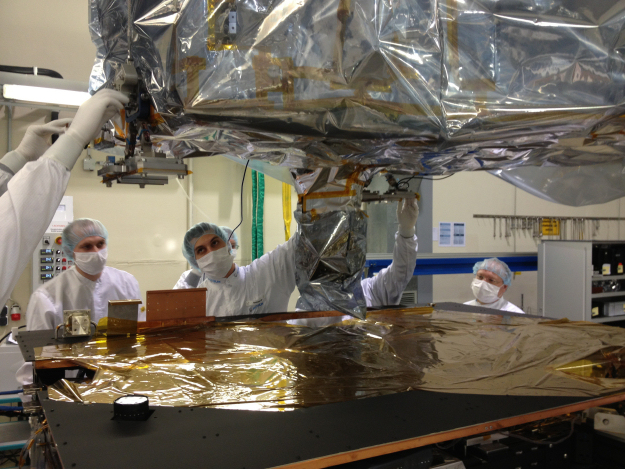 JWST's Near InfraRed Spectrograph (NIRSpec) cryogenic and vacuum (cryo-vacuum) test campaigns were undertaken at the IABG test facility in Germany. This photo shows the installation of NIRSpec onto the "support table", which rolls into the cryogenic test chamber.  While bringing NIRSpec to the table, it is not possible to have the "clean tent" present, so NIRSpec is "bagged" in a protective grayish multilayer insulation (MLI) cover. The actual flight MLI, a silver colour with goldish tape, can be seen through the "bag".

At the bottom of NIRSpec, two of the three sets of kinematic mounts can be seen. (An engineer is touching one set, and another engineer reaching just above the second set.) These mounts are the "feet" of NIRSpec, and will be bolted to the table.

In the centre of the base of NIRSpec an extrusion can be seen - this is the bottom part of NIRSpec's "periscope". This contains the "pickoff mirror" that will capture the light coming from the telescope and redirect it into NIRSpec.

This periscope will go through an aperture in the centre of the table. For the tests, light will arrive under the table onto the pickoff mirror.