ESA Science & Technology - Listening to meteors - how the technique works

Listening to meteors - how the technique works

Listening to meteors - how the technique works 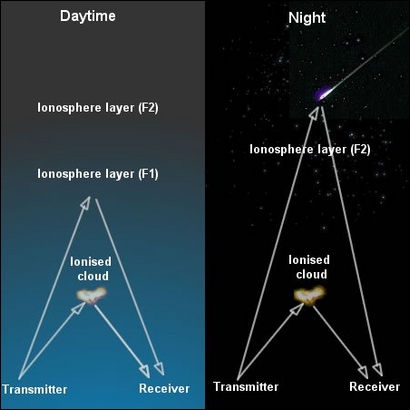 During the daytime, high-frequency radio waves are reflected back to Earth by the ionosphere. A meteor entering the Earth's atmosphere is slowed down and deposits most of its ionised matter below the ionosphere, at an altitude of about 90 km, in the process creating a small ionised cloud which drifts slowly with the atmospheric winds until it disappears. Radio waves reflect off this moving cloud creating echos (known as type 2) which are detected by the receiver. At night-time there are fewer and less dense ionospheric layers and the high-frequency radio waves can escape into space. These can intercept high speed meteors as they enter the upper atmosphere and produce short-lasting echoes (type 1), typically lasting 1 second, which have a large shift in frequency.
View »
6-Feb-2023 12:40 UT

Listening to the Leonids