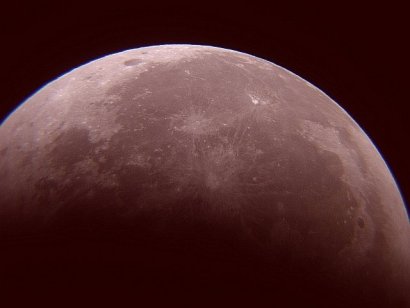 This image shows the western half of the Moon, north is to the right. It was taken at 00:33 UT during the partial eclipse phase of the 3 March 2007 total lunar eclipse, with the eastern half still within the Earth's shadow. The image was taken by Valmir Martins de Morais, at Centro de Estudos Astronômicos do Cariri, Ceará, Brasil. More images by Valmir Martins can be found at http://www.astrodatabase.net/fotos/v/valmirmmorais/eclipselunartotal/