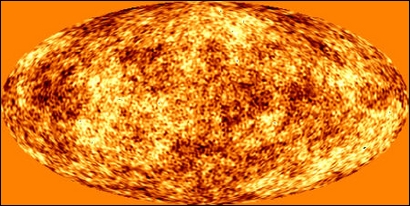 The Cosmic Microwave Background comes from everywhere with (almost) the same intensity. This was confirmed by the COBE satellite, which measured (almost) the same temperature of 2.7 degree Kelvin everywhere on the sky. However, the very existence of other galaxies points to the fact that there should be very small changes in the measured 'temperature' of the CMB. These changes, or fluctuations, would have provided the seeds for the formation of the galaxies that we see today. Planck will be able to measure these tiny fluctuations. Indeed it will be able to distinguish temperature differences of 5 millionths of a degree!
View »
22-Jan-2022 02:11 UT