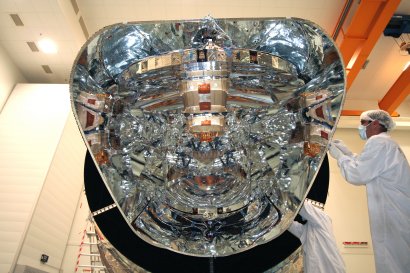 Top view of the Planck Flight Model spacecraft during preparations for the mechanical vibration tests, which took place December 2007 in Cannes.

The payload baffle with its silvered inner part surrounds the telescope and restricts the entry of stray radiation into the telescope optics.

The black surface seen behind the telescope is the third (upper) V-groove that is part of the cooling system used both to passively cool down to about 50 K and to shield the telescope from the warmer, Sun-facing, service module.