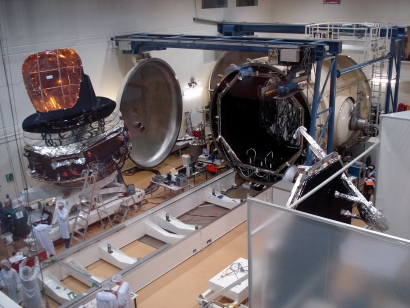 The Planck spacecraft resting on its multi purpose trolley next to the FOCAL-5 vacuum chamber that will be used for thermal and cryogenic testing.

Inside the cylindrical vacuum chamber is the eight-sided tubular thermal tent that will surround the Planck spacecraft during the tests. Its design allows for cryogenic temperatures down to the operational temperatures of the detectors of a tenth of a degree above absolute zero to be reached within the tent at the focal plane of the telescope.

The octagonal cover of the thermal tent stands in the foreground on the right (partly behind the semi-transparent screen). The closing lids of the vacuum chamber stand against the wall in the background of the image.