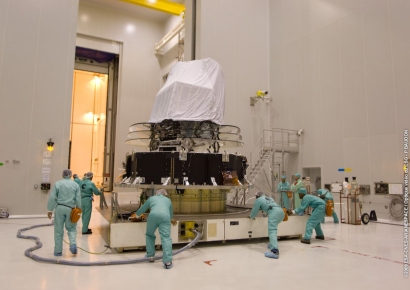 On 15 and 16 April the Planck spacecraft's fuel tanks were filled with 384 kg of hydrazine propellant. This hazardous operation was completed in the S5A building.

On 22 April the Planck spacecraft was prepared for transport from the S5A building to the final assembly building (BAF) for mating with the Ariane 5 ECA launcher.

The payload transport container (CCU3) used for the transport to the BAF was docked to the S5A building and is just visible in the background through its high open door.

Already integrated with the launcher adapter ring and secured on top of the CCU3 pallet, the Planck spacecraft is seen here being rolled out of the S5A cleanroom toward the CCU3.