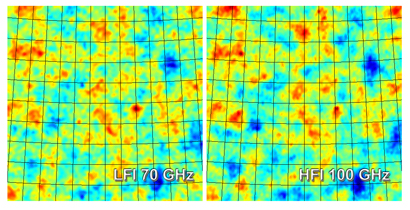 This zoom on an approximately 10°×10° region of the Planck First Light Survey where the Milky Way is not the predominant signal shows clearly the features which are of most interest to Planck, i.e. the Cosmic Microwave Background (CMB).

In the left and right panels are observations by LFI at 70 GHz and HFI at 100 GHz, respectively. At each of these frequencies the dominant emission is the CMB, and both maps indeed show very similar features. The small visible differences are expected, due to the still imperfect calibration at this early stage of processing, and to remaining low-level galactic emission.

The fact that two completely independent detectors based on different technologies are so quickly able to yield maps of such remarkable similarity is a powerful confirmation of Planck's ability to detect and map the very faint CMB structures arising in the early Universe.