Large-scale structure in the Universe

Large-scale structure in the Universe 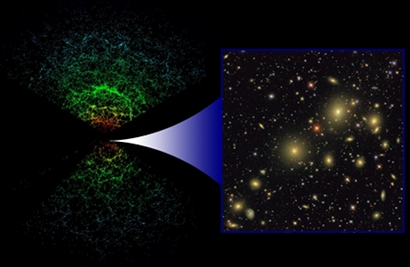 This illustration depicts the large-scale distribution of galaxies as seen by the Sloan Digital Sky Survey, an ambitious project that determined the distances of about one million galaxies.

The two cones on the left of the image are a three dimensional (3D) map of the galaxies with the Earth at the centre. Going from the centre to the upper/lower edges of the map, more and more distant galaxies are seen, up to distances of about 2 thousand million light years. The colour of the galaxies is related to their luminosity. The clumpiness in the distribution of matter is clearly visible in this representation.

The panel on the right shows a two dimensional (2D) image of galaxies in a small region of the sky. The 3D map is computed by combining the information contained in 2D images such as this one with an estimate of the distances of each individual object visible in it, derived from their spectra.