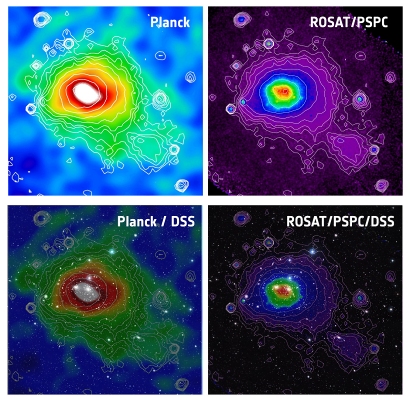 These images of the Coma cluster (also known as Abell 1656), a very hot and nearby cluster of galaxies, show how it appears through the Sunyaev-Zel'dovich Effect (top left) and X-ray emission (top right).

The top-left panel shows the Sunyaev-Zel'dovich image of the Coma cluster produced by Planck, and the top-right panel shows the same cluster imaged in X-rays by the ROSAT satellite. The colours in both images map the intensity of the measured signals. The X-ray contours are also superimposed on the Planck image as a visual aid.

As a comparison, the images are shown superimposed on a wide-field optical image of the Coma cluster from the Digitised Sky Survey in the two lower panels.

Located at a distance of about 300 million light-years from us, the Coma cluster extends over more than two degrees on the sky, corresponding to over 4 times the angular size of the full Moon. This image of the Coma cluster highlights Planck's ability to observe objects on very large scales, thanks to its all-sky survey strategy.

The region depicted in each image is slightly larger than 2 degrees.