Map of the excess dust emission in the Milky Way

Map of the excess dust emission in the Milky Way 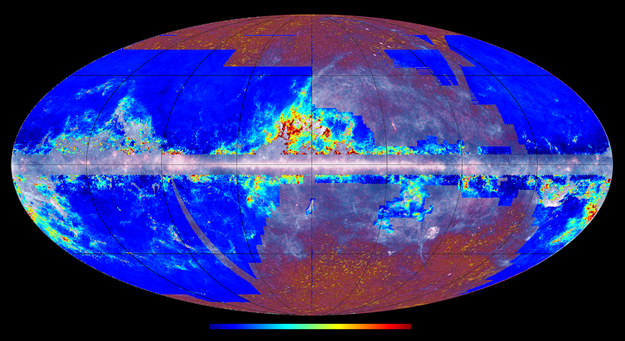 This image shows the distribution, over about 63 per cent of the sky, of the excess dust emission (sometimes referred to as 'dark gas'), one of the new, mysterious components of the interstellar medium (ISM) probed and studied by Planck. Previously only poorly quantified, this component is thought to consist of molecular gas which had never before been detected because it does not contain enough carbon monoxide (CO), a molecule often employed by astronomers to trace the presence and to measure the amount of molecular hydrogen (H2) in the interstellar medium. This excess emission is associated with the periphery of dense molecular clouds, where energetic ultraviolet photons are believed to destroy the CO molecules but leave the H2 undisturbed.

The distribution of the excess emission is represented in terms of an excess in the measured column density and is mapped as a gradient according to the colour bar plotted below the figure, which covers the range (from left to right) -0.5 to 3.0 x 1021 H/cm2. It is shown superimposed on top of the all-sky image from Planck's first survey, which highlights the two major emission sources in the microwave sky: the cosmic background and the Milky Way.