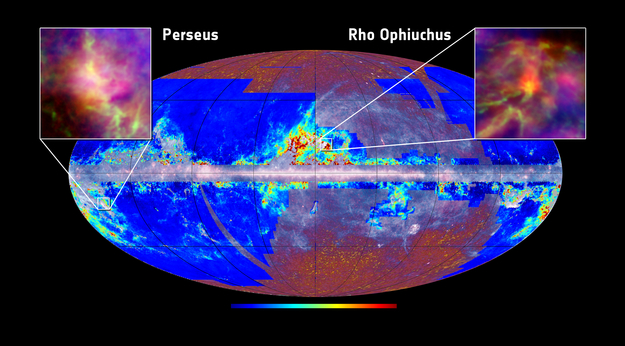 This image shows the distribution, over about 63 per cent of the sky, of the excess emission (sometimes referred to as 'dark gas'), one of the new, mysterious components of the interstellar medium (ISM) probed and studied by Planck, superimposed on top of the all-sky image from Planck's first survey, which highlights the two major emission sources in the microwave sky: the cosmic background and the Milky Way.

The insets show two regions of star formation in the Milky Way, the Perseus and the Rho Ophiuchus molecular clouds, where Planck has detected anomalous emission due to nano-sized spinning dust grains. Both images are colour-composites based on three individual images taken at 0.4 GHz from Haslam et al. (1982) and at 30 and 857 GHz by Planck, respectively, and have an angular size of 5 degrees each.

The distribution of the excess emission is represented in terms of an excess in the measured column density and is mapped as a gradient according to the colour bar plotted below the figure, which covers the range (from left to right) -0.5 to 3.0 x 1021 H/cm2.