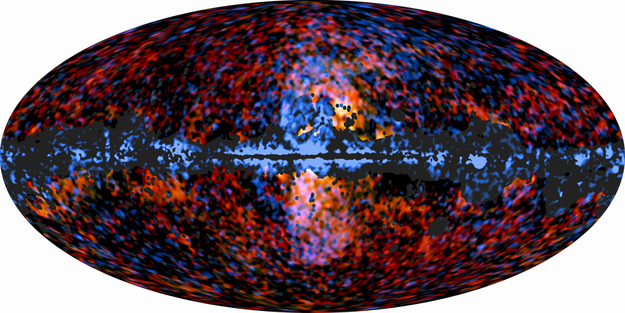 This all-sky image shows the distribution of the Galactic Haze seen by ESA's Planck mission at microwave frequencies superimposed over the high-energy sky as seen by NASA's Fermi Gamma-ray Space Telescope.

The Planck data (shown here in red and yellow) correspond to the Haze emission at frequencies of 30 and 44 GHz, extending from and around the Galactic Centre.

The Fermi data (shown here in blue) correspond to observations performed at energies between 10 and 100 GeV and reveal two bubble-shaped, gamma-ray emitting structures extending from the Galactic Centre.

The two emission regions seen by Planck and Fermi at two opposite ends of the electromagnetic spectrum correlate spatially quite well and might indeed be a manifestation of the same population of electrons via different radiation processes.

Several explanations have been proposed for this unusual behaviour, including enhanced supernova rates, galactic winds and even annihilation of dark-matter particles. Thus far, none of them have been confirmed and the issue remains open.

The Planck image includes the mask that has been used in the analysis of the data to exclude regions with strong foreground contamination due to the Galaxy's diffuse emission. The mask also includes strong point-like sources located over the whole sky.