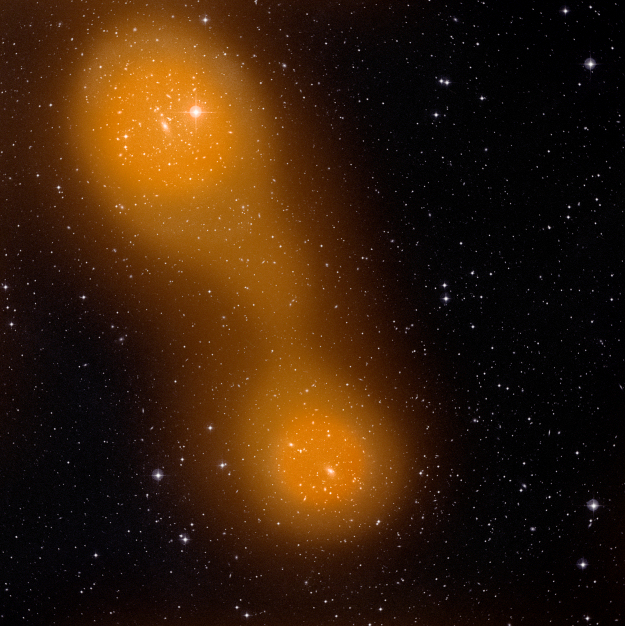 This image shows the two galaxy clusters Abell 399 and Abell 401, which can be seen in the upper left corner (Abell 401) and in the central lower portion of the image (Abell 399), respectively. They are located at redshift z~0.07 – about one billion light-years away from us.

In the optical image, obtained with ground-based telescopes, galaxies are visible as slightly elliptical, bright flecks. The two clusters can be seen as the two portions of the images that show a higher concentration of galaxies. The image is also dotted with several foreground stars that belong to our Galaxy, the Milky Way.

Depicted in orange is the hot gas that pervades the two clusters and the space between them, based on data from ESA's Planck satellite. Planck can detect the hot gas via the Sunyaev-Zel'dovich effect.

In addition to a significant number of galaxies, galaxy clusters contain hot gas and large amounts of dark matter. The hot gas in galaxy clusters manifests itself in two ways: directly, through its X-ray emission, and indirectly, via a characteristic signature it imprints on the Cosmic Microwave Background, known as the Sunyaev-Zel'dovich effect. By surveying the sky at microwave and sub-millimetre wavelengths, Planck is an ideal tool to hunt galaxy clusters across the sky exploiting the Sunyaev-Zel'dovich effect.

Astronomers analysing the Planck data for Abell 399 and Abell 401 have not only detected the individual signal from the gas in each cluster (which can be seen in the image as the two, bright orange regions) but also a 'bridge' of gas linking the two (the dimmer orange filament connecting the two brighter orange regions). The filament extends over about 10 million light-years and contains gas with a temperature of about 80 million K. At least part of this inter-cluster gas might derive from the warm-hot intergalactic medium (WHIM) – the elusive web of gaseous filaments which is believed to pervade the Universe.