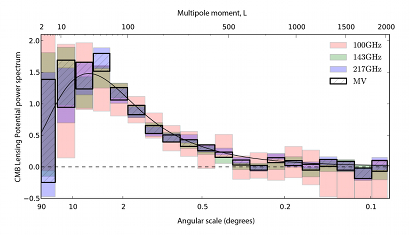 This graph shows the power spectrum of the gravitational lensing potential of the cosmic large-scale structure that distorts the Cosmic Microwave Background (CMB). It is based on data collected with ESA's Planck satellite during its first 15.5 months of observations.

This graph was compiled by analysing the tiny distortions imprinted on the photons of the CMB by the gravitational lensing effect of massive cosmic structures. As photons travelled through these structures, which consist primarily of dark matter, their paths became bent, slightly changing the pattern of the CMB.

The pink, blue and green data points are measurements made with Planck at 100, 143 and 217 GHz, respectively, which are shown with the corresponding error bars. The black boxes are an optimal combination of the measurements. The curve represents the best fit of the CMB temperature fluctuations measured by Planck to the 'standard model of cosmology' – currently the most widely accepted scenario for the origin and evolution of the Universe. The power spectrum measured from the gravitational lensing of the CMB agrees very well with the expectations from the model.