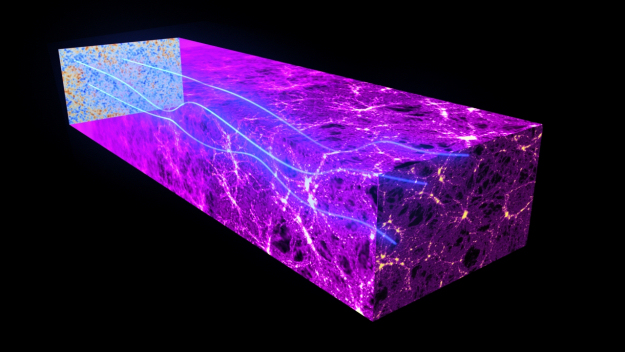 This illustration shows how photons in the Cosmic Microwave Background (CMB) are deflected by the gravitational lensing effect of massive cosmic structures as they travel across the Universe. Using data from ESA's Planck satellite, cosmologists have been able to measure this gravitational lensing of the CMB over the whole sky for the first time.

The CMB consists of the most ancient photons in the history of the Universe, which were emitted only 380,000 years after the Big Bang. Since then, CMB photons have travelled for over 13 billion years across the Universe, witnessing the dramatic changes that took place during the various cosmic epochs such as the formation of stars, galaxies and galaxy clusters.

Several observable effects arise from the interaction between CMB photons and the large-scale structure they crossed during their journey. One of the most intriguing is gravitational lensing, the deflection of light as it travels in the vicinity of massive objects such as galaxies and galaxy clusters. Gravitational lensing creates tiny, additional distortions to the mottled pattern of the CMB temperature fluctuations.

On their way to the Solar System, where they are eventually detected by the sensors on board Planck, photons from the CMB may cross many different massive systems as well as empty spaces. The photons encounter structures in different evolutionary stages, since the massive structures grow denser and the cosmic voids become less dense as time goes by. All of the structures from the different cosmic epochs contribute to bending the path of CMB photons. The total effect of these multiple deflections is a modification to the pattern of CMB temperature fluctuations, thus changing the typical 'shapes' of hot and cold spots in the CMB.

As a result of the detection of gravitational lensing experienced by CMB photons, cosmologists can use Planck to explore 13 billion years of the formation of structure in the Universe.

Celebrating the legacy of Planck