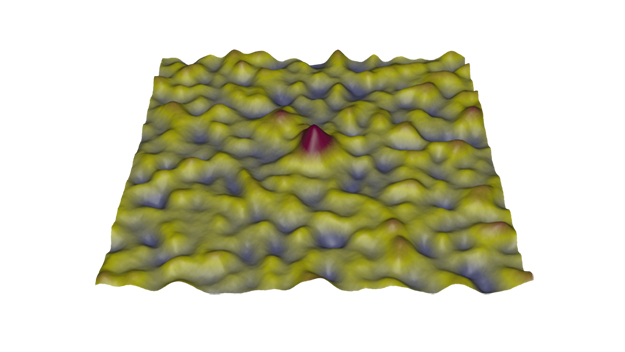 A visualisation of the signal detected at the positions of 200 000 quasars – the bright cores of active galaxies – in the gravitational lensing map compiled by ESA's Planck satellite. The peak shown in red is the result of the gravitational deflection of the cosmic microwave background – the most ancient light in the history of the Universe – by the dark matter halos hosting the quasars.

Galaxies tend to form in the densest knots of the cosmic web of dark matter that pervades the Universe, and host supermassive black holes at their cores. About one percent of galaxies are classified as 'active', as their black holes accrete matter at very intense rates, giving rise to bright emission across the electromagnetic spectrum.

In this study, the mass of the dark matter halo was estimated by using the tiny distortions imprinted on the cosmic microwave background by the gravity of matter throughout the Universe, an effect known as gravitational lensing, as measured by Planck.

Gravitational lensing distortions of the cosmic microwave background are small, but many can be combined, with the help of statistical methods, to obtain a stronger signal, piling up the data gathered around a large sample of quasars from the Data Release 14 of the Sloan Digital Sky Survey quasar catalogue.

This study uncovered the connection between the luminosity of quasars, energy that is released in the immediate vicinity of a supermassive black hole – a region spanning perhaps a few light days – and the mass of the encompassing halo of dark matter and surrounding environment, which extends for tens of millions of light years around the quasar.