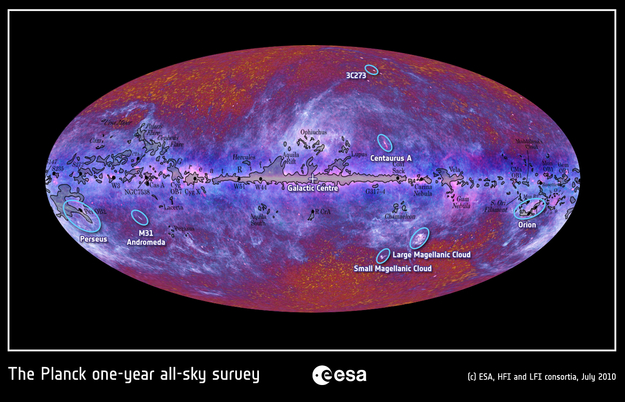 Emission from gas and dust in the plane of the Milky Way dominates this multi-colour all-sky image of the microwave sky, synthesized using data spanning the full frequency range of Planck, which covers the electromagnetic spectrum from 30 to 857 GHz.

Superimposed on the Galactic Plane, a survey of carbon monoxide (CO), realised by T. Dame et al., highlights the extent of the densest molecular clouds throughout the Milky Way. Observations of CO molecular lines are used to trace the presence of molecular hydrogen and identify regions of intense star formation.

Other galactic features recognisable in the image are the Galactic Centre and the giant molecular clouds of Perseus and Orion, both of which are extremely active regions of star formation.

The Large Magellanic Cloud (LMC) and the Small Magellanic Cloud (SMC), two small satellite galaxies of the Milky Way which are also among our Galaxy's closest neighbours are clearly visible, as is the spiral galaxy M31, or Andromeda, the largest galactic neighbour of the Milky Way. The LMC lies at a distance of about light-years from the Sun, the SMC at about light-years and M31 at about 2.5 million light-years. All three objects, along with the Milky Way and several other galaxies, belong to the Local Group of galaxies.

In addition, Planck's ability to detect hundreds of extragalactic radio sources, both nearby and distant, is clearly evident in this image - two examples are highlighted in the northern hemisphere. Centaurus A, the most nearby giant elliptical galaxy, located about 12 million light-years away from us, is visible just above the Galactic Plane; this galaxy has an active galactic nucleus, with intense radio emission arising from jets of plasma and lobes of high-energy particles emanating from its central, supermassive black hole. Also, 3C 273, a bright radio source located at redshift z~0.15 (corresponding to a distance of about 2 thousand million light-years away) can be seen towards the northern Galactic Pole.