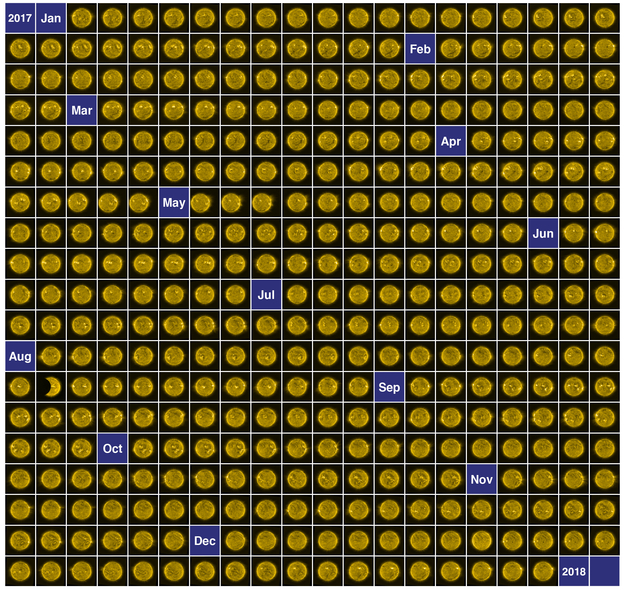 This montage of 365 images shows the changing activity of our Sun through the eyes of ESA's Proba-2 satellite during 2017, along with a partial eclipse for good measure.

The images were taken by the satellite's SWAP camera, which works at extreme ultraviolet wavelengths to capture the Sun's hot turbulent atmosphere – the corona, at temperatures of about a million degrees.

In general, the Sun's 11-year activity cycle continued throughout 2017 towards a minimum, a period when the number of active regions (seen as bright regions in the images) diminish, and coronal holes (seen as darker regions) are larger and more prominent.

Look closely and several images stand out as different. For around a week at the end of April/beginning of May the Sun is not centred in the field-of-view: this is deliberate, indicating 'off-pointing' observations to study the extended atmosphere.

Perhaps the highlight for many Sun-watchers last year was the total eclipse observed from Oregon to South Carolina in the US on 21 August. From its viewpoint in space, about 800 km above Earth, Proba-2 passed through the Moon's shadow several times and observed three partial eclipses. One such moment is captured in the montage presented here.