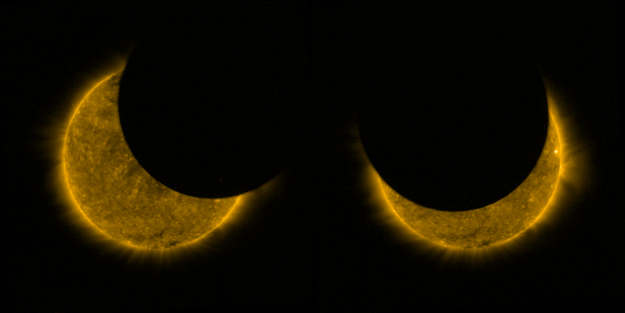 Thanks to a quirk of our cosmos, the Moon's average distance from Earth is just right for it to appear as the same size in the sky as the significantly larger Sun. Once in a while the Moon slides directly between Earth and the Sun such that it appears to cover our star completely, temporarily blocking out its light and creating a total solar eclipse for those along the narrow path cast by the Moon's shadow.

But sometimes the alignment is such that the Moon only partially covers the Sun's disc. Such a partial eclipse occurred on Saturday for observers located primarily in northern and eastern Europe, northern parts of North America, and some northern locations in Asia.

ESA's Sun-watching PROBA2 satellite orbits Earth about 14.5 times per day and with its constant change in viewing angle, it dipped in and out of the Moon's shadow twice during Saturday's eclipse.

The images were taken by the satellite's SWAP camera, which works at extreme ultraviolet wavelengths to capture the Sun's hot turbulent atmosphere – the corona – at temperatures of about a million degrees, which can be seen in the background.