ESA Science & Technology - An orbit's worth of particle data

An orbit's worth of particle data

An orbit's worth of particle data 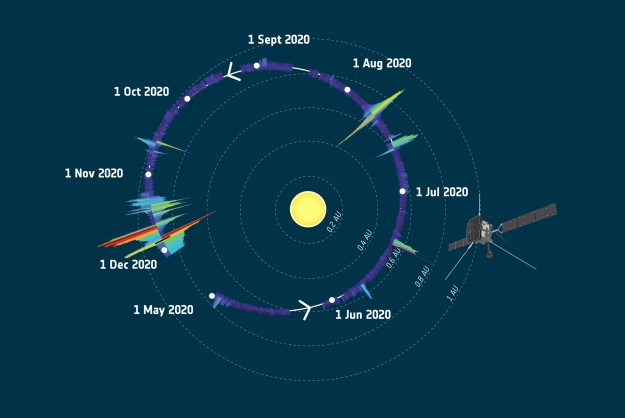 Solar Orbiter's Energetic Particle Detector (EPD) has been switched on and collecting data since March 2020. It has now collected an entire orbit's worth of data.

EPD measures the energetic particles that zip past the spacecraft. It looks at their composition and variation in time. The data will help scientists investigate the sources, acceleration mechanisms, and transport processes of these particles.

The diagram shows the flux of particles captured by the spacecraft during its first orbit (the earliest data is not included to avoid overlap on this diagram). The flux is calculated from the rate at which energetic particles are entering the instrument and represents space weather events in the solar wind. The spikes indicate the fluxes of electrons (shown as spikes pointing inwards towards the Sun in this representation) and ions (spikes pointing outwards), on a logarithmic scale.

The solar wind is the constant stream of particles that flows away from the Sun. Energetic events such as solar flares and coronal mass ejections can accelerate and release large quantities of high-energy particles. Although the Sun has been relatively inactive this year, there have still been a number of space weather events that had dramatically increased the number of energetic particles flowing past Solar Orbiter.

Although this plot comes from EPD, the three other in-situ instruments on Solar Orbiter are also designed to study these events in unprecedented detail. The three other instruments are Magnetometer (MAG), Radio and Plasma Waves (RPW), and Solar Wind Plasma Analyser (SWA).

By taking these state-of-the-art instruments close to the Sun, Solar Orbiter is able to use high data rates to capture the details with more fidelity than ever before. In the case of the EPD, researchers are already seeing rapid variations in the number of particles that are associated with changes in the magnetic field, as seen by MAG.

This is revealing fine scale structures and new physical interactions in the solar wind that we have never seen before.